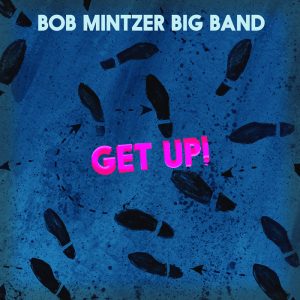 All arrangements by Bob Mintzer

Story Notes:
Get up! Get up and dance to these infectious grooves that come from Africa by way of African American culture in the U.S., sometimes referred to as R & B, intersecting with the blues, Jazz, Afro-Cuban music, and that distinctly American sound that permeated the airwaves in the 1960s and beyond. Artists like James Brown, Sam and Dave, The Isley Brothers, all the Motown artists, and ultimately bands like Sly and the Family Stone, Tower of Power and Herbie Hancock’s Headhunters from the bay area (East Bay Grease!) are all part of the evolution of the sound.
I grew up listening to this music. In New York City you could turn on WNEW FM in the evening and hear a Miles Davis cut followed by a Jimi Hendrix track, followed by John Coltrane, then Marvin Gaye, followed by something from Sly and the Family Stone. Training as a musician in NYC, one was exposed to Jazz, R & B music, Afro-Cuban music, ethnic music from all over the world, and just about every kind of music imaginable. So many possibilities in terms of combining elements to find new ways to play and write.
Here, then, are nine tracks that are clearly R & B influenced, but then go to many other places along the way. The big band instrumentation lends itself to this rhythmically intense music very nicely while allowing for a myriad of color and texture possibilities in the process. Using these relatively simple tunes as a springboard for harmonic, rhythmic, and melodic exploration was a real adventure, one that I had been thinking about for a long time.
So very grateful to have had the opportunity to assemble my dream band for this project. William Kennedy, Russell Ferrante, Ray Obiedo, and Will Lee add new meaning to the term “fonky.” The horn section is comprised of the best in the business, mostly my long-term friends and associates from both New York and Los Angeles. Thanks to all the musicians for their stellar playing!
Thank you to all the great musicians who inspired the making of this recording: James Brown, Sly and the Family Stone, The Isley Brothers, Otis Redding, The Four Tops, Igor Stravinsky, Thad Jones, B.B. King, Gil Evans, The Ohio Players, Tower of Power, Weather Report, and the New York and Los Angeles Philharmonics. Quite the eclectic brew, you say? Damn straight! Wide open.
Many thanks to Marty Ashby, Jay Dudt, Renée Govanucci, and the crew at MCG, you guys are the best! Special thanks to my wife Carla, who danced the whole time we were recording this music. Your spirit and enthusiasm for music and life is one of my biggest inspirations. Big thanks to my son Paul, who is stylist to the stars, and keeps me thinking about the clothes I wear. Thanks to Will and Russ, my band mates in our band of insects, you both make everything sound so good!
Bob Mintzer

NEXT RECORDING:
Joyful Jazz
PREVIOUS RECORDING:
The Hope of Christmas