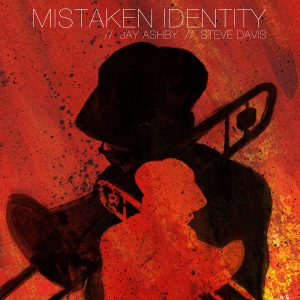 For many years, Ashby and Davis sat side by side in both The Dizzy Gillespie™ All-Star Big Band and Slide Hampton’s World of Trombones, and no matter where they were—waiting backstage at the Blue Note in Tokyo, sitting in the green room during intermission at Disney Hall in Los Angeles or standing in the wings of The Olympia Theater in Paris—Jay and Steve were constantly mistaken for one another. Chalk it up to an uncanny physical resemblance or their common roots in upstate NY, their shared musical influences, the fact that they both play large horns, or a combination of all of these factors. Whatever the reason, it happens frequently enough to have inspired the title of their new CD Mistaken Identity.

NEXT RECORDING:
Hill District BEAT
PREVIOUS RECORDING:
For The Moment