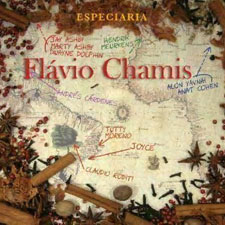 Especiaria is a record that deals with possibilities. The possibility of a classical musician, such as Chamis, directing a new look into popular music, resulting in a hybrid reading that preserves the meanderings and particularities of both universes. Or still, the possibility of musing on a path that started with an informal contact with music. But now Chamis applies all his experience as a maestro and practically “conducts” the whole creative process of the CD. Not only did he compose, arrange, and write the lyrics, but we also find his secure hand assisting in the editing, mixing, and even in the artwork, in which Brazilian spices (Especiarias) are displayed as if thrown onto an old colonial map. The cover sends us back to the beginning of the process, revealing the map from which Chamis ventures off on the search for his “musical spices”.