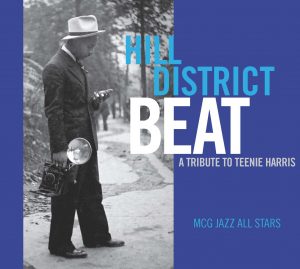 A groundbreaking exhibition, Teenie Harris, Photographer: An American Story, opened at the Carnegie Museum of Art in Pittsburgh, Pennsylvania on October 28, 2011. The exhibition celebrates this artist/photographer whose work is considered one of the most complete portraits of 20th Century African American experience. Large-scale, themed photographic projections of nearly 1,000 of Teenie Harris’ greatest images accompanied by an original jazz soundtrack created by the MCG Jazz team of composers and arrangers generate a non-verbal, visceral experience in the exhibition’s opening gallery. Hill District BEAT, an enhanced CD manufactured in partnership with Carnegie Museum of Art features over 100 of Teenie Harris’ most iconic images of luminaries of his day synced to the original soundtrack performed by the MCG Jazz All Stars, a collection of musicians associated with the MCG Jazz family including pianist, David Budway; bassist, Dwayne Dolphin; drummer, Roger Humphries; and trumpeter Tom Williams. When played in a CD player like a standard CD, you are taken on a 22-minute journey of 40 years of 20th Century jazz. The “listener” can also play it through a computer for additional multimedia experience. The enhanced portion includes a PDF file with a detailed biography of Harris.