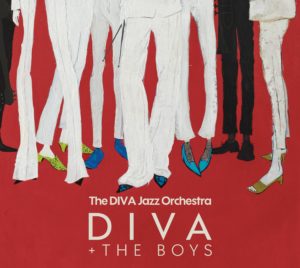 The One I Love Belongs To Somebody Else

“DIVA + THE BOYS” is fierce and full of swing. MCG Jazz has been involved with The Diva Jazz Orchestra—an ensemble of 15 talented musicians—who happen to be women – since its inception. For the third time, DIVA wanted to partner with MCG Jazz and include some of today’s most exciting soloists. The band performed on the MCG Jazz stage with Ken Peplowski, Jay Ashby, Claudio Roditi, and MCG Jazz Executive Producer Marty Ashby. From that live performance came the album “Diva + The Boys.” The collaborations led to exciting arrangements filled with fire, finesse, and swing.

Produced by MCG Jazz’s Marty Ashby, “DIVA + THE BOYS” is an interesting collection of songs ranging from original compositions by the guest soloists to jazz standards and famous Brazilian jazz songs showing the versatility of the band playing a variety of styles.  Tracks include “Slipped Disc” by Benny Goodman, arranged by DIVA bassist, Noriko Ueda; “A Felicidade” by Antonio Carlos Jobim and Vinicius De Moraes; guest soloist, Jay Ashby’s original composition, “Deference to Diz;” “Noturna” by Ivan Lins and arranged by Jay Ashby; “The One I Love Belongs To Somebody Else” by Gus Kahn and Isham Jones; “Piccolo Blues” by guest soloist Claudio Roditi; “Estate” by Bruno Brighetti, Bruno Martino and Joel E. Seigel; and the riff style blues “Bucket O’ Blues.”

Headed by drummer Sherrie Maricle – DIVA is known to exude the excitement and force found in the tradition of the historic big bands but with an eye towards today’s progressive sound of originality and verve. With New York as their home base, DIVA performs all over the world playing contemporary, mainstream big band jazz composed and arranged to fit the individual personalities and styles of the musicians themselves. Audiences can expect to hear high-energy performances packed with unique improvisation, spontaneity, and fun.

The inspiration for DIVA came from Stanley Kay, one-time manager and relief drummer for Buddy Rich. In 1990, Kay was conducting a band in which Sherrie Maricle was playing the drums. Stanley immediately picked up on her extraordinary talent and began to wonder if there were other women players who could perform at the same level.

In 1992 the search was on, and through nationwide auditions the foundation for DIVA was poured. What emerged is the dynamic musical force that holds forth to the present day.

DIVA has been performing regularly on the concert series at Manchester Craftsmen’s Guild since 1994. In 2014, they released its “A Swingin’ Life” album with MCG Jazz. A live recording, similar to “DIVA + THE BOYS,” the album was recorded at Dizzy’s Club with guest artist Marlena Shaw and at MCG with NEA Jazz Master, the late Nancy Wilson.

Tour dates for The DIVA Jazz Orchestra can be found at:  https://divajazz.com.

NEXT RECORDING:
For All We Know
PREVIOUS RECORDING:
Bernstein Reimagined