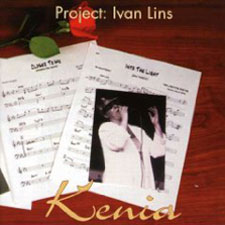 Carioca by birth, singer by trade, Kenia’s talent embodies the best of the modern Braziian sound. It’s a romantic and exciting cross between pop and bossa. In this CD Kenia sings her favorite songs of Ivan Lins’ song book.

After taking a few years off to focus on raising her two sons and studying music, Kenia started her own label, Mooka Records and produced a CD consisting entirely of Ivan Lins’ compositions, “PROJECT: IVAN LINS”. This project also features special guests such as Romero Lubambo, Jay Ashby and Ivan Lins, himself, who sings 2 duets with Kenia, on “Closer to me” (Mudanca dos Ventos) and “Even you and I” (Lembra). Although this is perhaps Kenia’s most Brazilian project to date, she never seems to lose that “certain something” that has always made her music transcend geographic and musical boundaries.

NEXT RECORDING:
Love Lives On
PREVIOUS RECORDING:
What You’re Looking For