Music
The Hope of Christmas 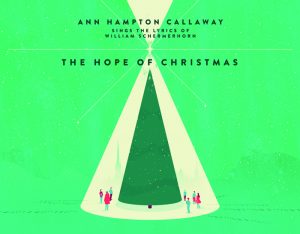 “One of the miracles of songwriting is how anyone can possibly create a new effort when seemingly everything has already been expressed. Add to that notion the thought of writing a new Christmas song with something to say that feels familiar yet fresh… Enter William Schermerhorn with pen in hand and nimble mind at the ready. ” Michael Feinstein, From THE HOPE OF CHRISTMAS liner notes
“Ann possesses what I think of as a quintessential Christmas voice. Sweet and pure… her sound transports you.” Stephen Holden, The New York Times

BACKGROUND INFORMATION
The eighteen-month collaboration between singer, lyricist and record producer to bring THE HOPE OF CHRISTMAS to the public has kept the holiday season and its inspiring message at the forefront for the many artists involved. Starting with a list of approximately thirty songs, the Ashby-Callaway-Schermerhorn team ultimately came up with the dozen songs (including two brand-new compositions by Callaway/Schermerhorn) that make up the playlist.
With the exception of the Emmy® nominated song I BELIEVE, which was first performed by Kermit the Frog and released as a single with Kermit the Frog and Disney star Tiffany Thornton, the songs on THE HOPE OF CHRISTMAS recording will be available to the public for the first time in these dynamic, all-new jazz arrangements by Jay Ashby, Marty Ashby, Callaway and Mike Tomaro.
“Christmas music, in all its styles, touches the heart like no other music I know,” says William Schermerhorn. “For over two decades, I have been blessed to have the opportunity to tell new Christmas stories for a wide variety of events through the lyrics of my songs. It’s a gift to now hear these songs interpreted by Ann Hampton Callaway and the extraordinary jazz musicians that Marty Ashby has assembled for this recording. Knowing that proceeds from the sale of this recording benefit MCG Jazz to carry out its mission is like having extra tinsel to make the holiday season shine even brighter.”

“MCG Jazz is honored to be a part of this important project,” says Marty Ashby. “Bill Schermerhorn’s lyrics are such a powerful representation of the spirit of the holiday season and there is no one more elegant than Ann Hampton Callaway to deliver the message in a most profound way.”

Reflecting on this collaboration, Ann Hampton Callaway comments that “Singing and composing music for this collection of Bill Schermerhorn’s new holiday songs has been a joy and an honor. Since music has the power to open hearts and unite us, may the spirit of this record inspire each listening heart to bring more love to each day, so that the season of love can last all year round!”

All lyrics by William Schermerhorn

ANN HAMPTON CALLAWAY (vocals, composer) Multi-platinum selling & Tony nominated singer/songwriter Ann Hampton Callaway has written over 250 songs, including the theme to the hit TV series The Nanny and multi-Platinum hits for seven of Barbra Streisand’s recent CDs. The dynamic vocalist keeps a heavy touring schedule performing at PACs, theatres and jazz festivals all over the world. The past two years, Ann has taken the symphony world by storm with her award-winning tribute to her legendary mentor with “The Streisand Songbook,” which she premiered with The Boston Pops and continues to tour nationwide, along with her more recent, riveting tribute to the great American vocalist Sarah Vaughn (“From Sassy to Divine: The Sarah Vaughan Project”). Callaway’s starring role in the jazz Broadway musical Swing! earned her a Tony nomination and The Theater World Award. Ann was also one of the show’s co-creators. Her music and lyrics have been performed and recorded by Barbra Streisand, Carole King, Liza Minnelli, Patti Lupone, Michael Feinstein, Blossom Dearie, Peter Nero, Karrin Allyson, Donna McKechnie, Harvey Fierstein, Lillias White, Barbara Carroll, Amanda McBroom and Liz Callaway.

The Cole Porter Estate officially recognizes Ann Hampton Callaway as the only composer to have collaborated with Cole Porter, having set her music to his posthumously discovered lyric, “”I Gaze In Your Eyes.” Callaway’s performances have been seen on numerous TV shows including The Today Show, CNN’s Larry King Live, The Charlie Rose Show, The Oprah Winfrey Show, The Rosie O’Donnell Show, and ABC News. She starred in “Midnight Swing” for the PBS television special “Live From Lincoln Center” and was featured in another PBS special with Keith Lockhart and the Boston Pops. She has also been a featured performer on the NBC Special “Macy’s Fourth of July Fireworks Spectacular” and NBC’s “Macy’s Thanksgiving Day Parade.” Her voice has been heard in numerous TV jingles and voiceovers including spots for Coca Cola, Ethan Allen and State Farm. Ann has also done extensive broadcasting for Sirius Satellite Radio as a performer, DJ and interviewer. She is in discussion about hosting a TV talk/variety show for singers and singer-songwriters. She has garnered an unsurpassed fourteen awards from The Manhattan Association of Cabarets and Clubs, two Backstage Bistro Awards, The 2005 Nightlife Award, The Johnny Mercer Songwriter Award and The Norman Vincent Peale Award For Positive Thinking.

Ann devotes much of her time to philanthropic causes, both as a singer performing in numerous benefits, and as a songwriter composing songs in times of need. Ann resides in New York and lives by the creed best expressed in the Andre Gide quote: “Art is the collaboration between God and the artist and the less the artist does, the better.”

Bill is a member of The Dramatists Guild, Inc. and a graduate of The College of William & Mary. He was born on the 4th of July.

MARTY ASHBY (producer, guitarist) is a jazz guitarist, GRAMMY® Award-winning producer, programming consultant, motivational speaker and lifelong advocate of jazz music and its unique place in American culture. He founded MCG Jazz, in Pittsburgh, PA in 1987 and manages its presenting, education and recording programs to this day. For nearly three decades, Ashby has been an artistic advisor and producer for jazz concerts and festivals around the country. Ashby has produced five GRAMMY® Award-winning albums with Nancy Wilson, the Count Basie Orchestra and Paquito D’Rivera. A professional musician since age eight, he continues to play and record and has performed with Slide Hampton, Claudio Roditi, Nancy Wilson, Paquito D’Rivera, Herbie Mann, Phil Woods, The Dizzy Gillespie All-Star Big Band and others.